Roth also holds to the themes of bravery and selflessness she laid down in the beginning of the series which was good. My favorite part was the note that Four leaves Tris and the way he addresses it. 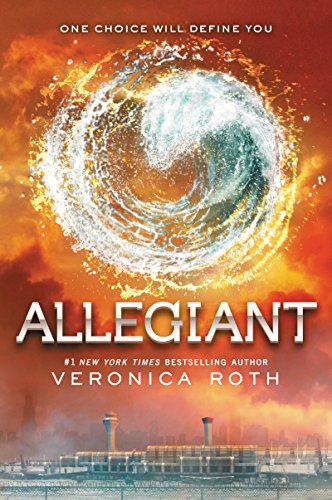 I found myself having to refer back to the chapter title quite often so that I could remember who was supposed to be talking. There was a huge amount of information dumped in the middle which slowed the pacing slow down considerably and will most likely confuse a few readers. Tris and Four have been through more than the average teenager and it's easy to forget sometimes that they are in fact, teenagers. Their relationship was a mix of ups and downs and after having walked through the mire of grief that was INSURGENT, I was really looking forward to this being a lighter time for them, but it wasn't.

I wasn't necessarily expecting a HEA, but I was hoping for a happier resolution. A chance for Tris, Four and a few others to experience life on their own terms. I "get" why Veronica Roth ended it this way, and yes, the story does come full circle, but I still choose to believe it could've had a different outcome while still driving home the ideals of bravery, selflessness and sacrifice. Final Verdict: Stunning end to the series that's sure to leave readers dangling over a chasm of feelings.

February 16, The Divergent series comes to an end as Tris, Tobias and the gang venture outside the fence. This was another great novel by Veronica Roth. I loved the dual narration from Tris and Tobias which was something new and different. Secrets are revealed and Tris gets to learn more about her mother's past. Another great part of the novel is that Tris and Tobias mature more in their relationship.

There is also a lot of action, suspense and twist and turns like there were in Divergent and Insurgent. Allegiant was an emotional read especially with the way it that ended, but I really did enjoy the series. Fay Tannerr Top Reviewer 70 reviews.

The Fault In Our Stars

Very Good. February 11, First off, the dual points of view is something I absolutely love. If you've read previous reviews, you probably know I like a few different points of view. So having the 2 POVs is something I loved. I loved being able to see both sides, in this case Tris and Tobias, of the equation and being able to read their different stances on the events happening. I liked how the plot ran. It went smoothly and I was able to understand everything happening without it being too complicated or unbelieveable. I also thought that the book was fast paced and not at all boring.

Tobias kind of annoyed me in this book. I understand he was overwhelmed with everything but I think he should of taken Tris's opinions into account especially when we meet Nita. I thought it was real man-like sorry guys when he wouldn't listen to Tris, who clearly knew what she was talking about. For once I would like to see a man who for once listens to us women when we are obviously right all the time. Tris, I think, should have taken into account how Tobias felt at times throughout the book. I think she was too concerned with her being right then trying to understand why Tobias was doing what he did at the beginning of the middle of the novel.

If you haven't read the book First off, I did cry at the ending, like any devoted fan of the Divergent series at the death of a great character.

I also liked the ending. Not because it was sad and I didn't really want that to happen because it was unexpected and believeable. Not every character makes it out of the series alive, even ones you don't expect to die. So that is, my rational, book reviewer side, agrees with the way Veronica Roth chose to end this book. My fangirl side would have liked the ending to be sunshine and rainbows, but frankly, that would have been predictable and I was happy the ending wasn't predictable.

The book, I think, would not have been as memorable or good with a predictable ending. I especially liked the 2 years into the future section of the novel. I liked that I was able to see what happened after all the action and everything was kind of settled down. Lizzy Spangler Top Reviewer 11 reviews. Allegiant Reivew. December 05, After all that happen in the last book Tris and Four decides to get a new life. They escape the city and find out about what is outside.

There they meet new people and learn new things about the world they live in. They learn about how vast they are and how there is more places like the factions.

They learn how they get the factions together and how they started. They learn about the serums and how the ones that were used against then during Jeanine's attacks. They have to make the final decision, to accept what they did to their family or to fight back and do something about it. There is romance and it is in a different world, a world in the future. This series will be great for someone who enjoyed the Hunger Games. This book continued the previous in the best way it could. Jiawei Dong Top Reviewer 3 reviews.

July 20, Really, anything except that. And I get what Veronica says, I really do. The ending was right for the book. I just hated it, along with all the other readers out there.

I give it four stars, even though it deserves five. No go away and let me cry in peace! January 31, The Divergent series is one of my favorite series ever written. I do love a book with a dual POV it gives you a look at things from the other persons perspective. I think that this was a good ending to the series. However it absolutely killed me to have it end the way it did. Everything gets wrapped up it doesn't leave you with any questions or confused it just leaves you in a big crying mess wondering what in the heck just happened.

Once I realized the path this book was taking I was devastated. It is hard to put my feelings on this series ender into words. I hate to leave the characters. I could read about Tris and Four and their world forever. They are two characters that I fell in love with from the very beginning.

At the end of the day I think that this was a good ending to the series as much as devastated as I am by it. Sara A.